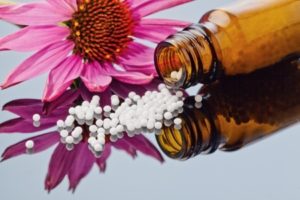 ” There have been two great revelations in my life: The first was bebop, the second was homeopathy.”

Homœopathy is a holistic system of medicine developed by German physician and chemist, Dr Samuel Hahnemann (1755-1843), based on the principle of “let likes cure likes”. This law or principle is based on a long held belief as far back as Hippocrates, the Father of Medicine, and other ancient healers such as Paracelsus, that substances that produce symptoms in a healthy individual can be used to treat similar symptoms in a sick person. Thus homœopathic treatment is believed to stimulate the body’s ability to fight infection and susceptibility to disease.

An example of this principle is coffee. Some people are very sensitive to its effects and can be over stimulated by taking it. They may experience overly heightened mental and physical alertness, and become unusually reactive to normal stimuli such as sounds and smells, etc. When a person presents at a homœopathic clinic with symptoms of insomnia, headache, irritability and an over stimulated nervous system, Coffea cruda may be chosen to alleviate their condition, prepared according to special homœopathic principles. It has been shown that this may settle the symptoms of insomnia in such cases.

Homœopathy is now used worldwide, with a 200 year history of clinical experience. It is recognised by the World Health Organisation as a valid form of healthcare. Homœopathy has legal recognition as an individual system of medicine in 42 countries and is recognized as a part of complementary and alternative medicine in 28 others.

Homœopathy may be used in the management of a variety of illnesses and conditions and minor accidents requiring first aid. It is a traditional medicine and may be used alongside conventional treatments and medications where applicable or required.